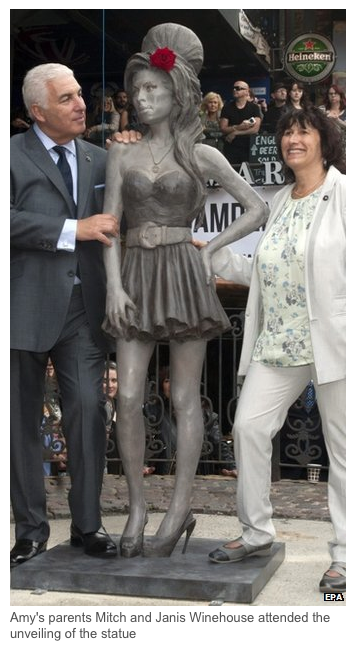 A life-size bronze statue of singer Amy Winehouse has been unveiled in Camden, north London.

The event, three years after her death, fell on what would have been her 31st birthday.

Her father, Mitch Winehouse, said she was “in love with Camden” and it is the place fans most associate with her.

Created by sculptor Scott Eaton, the statue features the Back to Black star with her hand on hip and her trademark beehive hairdo.

Fans and relatives gathered for the unveiling in Camden’s Stable Market, where it will be a permanent memorial to the singer.

London-based Mr Eaton, who sculpted the piece after being introduced to Ms Winehouse’s father Mitch, said the statue was meant to capture her “attitude and strength, but also give subtle hints of insecurity”.

“The hand on the hip, the turn of the head, the grabbing of the skirt, the turned in foot – these are all small elements that contribute to the personality of the piece,” he said.

Mr Winehouse said seeing the statue was “incredibly emotional” adding that its creator had “done an amazing job in capturing her”.

“It is like stopping her in a beautiful moment in time,” he added. “We really hope Amy’s fans love the statue.”

She had previously struggled with alcohol and drug abuse. The inquest into her death found she died of accidental alcohol poisoning.

Her family has since set up a foundation in her name to help young people with problems including addiction.