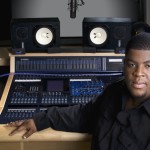 If you haven’t heard of Mack Wilds, you’ve probably seen him. Gracing the big and small screens since 2005 as Tristan Wilds, he’s starred in shows like ‘The Wire’ and ’90210′ as well as appeared in ‘Red Tails’ and ‘The Secret Life of Bees’ alongside Queen Latifah, Jennifer Hudson and Alicia Keys. However, like musicians who want to transition from the stage to the screen, Wilds is moving into music, and in a big way, too. His latest single, ‘Own It,’ proves that there’s more edge to this otherwise fresh-faced guy.

“As with any actor who’s trying to get into music, it’s definitely a challenge,” the 24-year-old tells TheDrop.fm as he casually checks his iPhone for any new messages. “You have to prove yourself. You have a proving ground, and you have to improve. And if you don’t, you’ll be held to a hire rate. You have to be better than good enough, just to be acknowledged. Thank God, I haven’t heard anything bad yet.”

Despite his introduction into the spotlight, Wilds has been singing since he was a little kid grooving in his stroller to Public Enemy‘s ‘Fight the Power’ or running around the house singing Brian McKnight‘s ‘One Last Cry.’

His love of performing led him to try doing music on his own. Under his own management company, he put out tracks like ‘Cold’ and ‘Fall 4 Her.’ “When I did ‘Cold’ and everything, I wasn’t signed,” he explains. I had my management company, which everyone probably thought I was signed to. But I was an indie artist trying to put out music, just to let people know I do music. All of that culminated to what you hear today. It’s literally the growth from ‘Cold’ and being around different artists and learning different tricks and getting helped in certain areas. It all just came together. It’s definitely different but it’s great nonetheless.”

Now he’s signed to Salaam Remi’s label, Louder Than Life, distributed through Sony Music. Wilds is ready for bigger things and ‘Own It,’ co-written by Ne-Yo, is just a taste of what we can expect from this rising music star. “Ne-Yo wrote the song and is the type of guy who just spews out ideas so fast,” he shares. “It could be half an idea, and it’s still good. You’ve got to remember this is Ne-Yo, we’re speaking about. So Ne-Yo spit out an idea — a verse and a chorus — and left it alone. Salaam really liked it and told me to try it, and it actually worked. He asked me if I write, too. I said, ‘Yeah.’ So he said, ‘Why don’t you finish it?’ So I finished it, and it turned out to be amazing, and we got the stamp from Ne-Yo. He loved it. So it all just worked out.”

Proud of his recent work, Wilds will be releasing his debut LP, ‘New York: A Love Story,’ on Sept. 17. “I’ve known Salaam for four years now,” he says. “And originally we were just talking about how we miss New York, being in L.A. You know, just being away from New York and what the city gives us, especially in the summertime. So the album was based on that idea like, ‘Let’s make something for New York.’”

According to the singer, his project is an ode not only to the Big Apple but also to the hip-hop classics heard 20 years ago. “It’s just real, iconic, gut-wrenching hip-hop music, and I’m singing on a lot of it,” Wilds explains. “So just think about that — the juxtaposition of singing on hip-hop songs. It throws you back to a time when it was prevalent in music like in the ’90s.”

While other artists get nervous about putting out their debut album, Wilds is confident his first offering is something people want to hear. “Honestly, it’ll just be flooding the streets and making the streets hear and understand that Mack Wilds is here,” he exclaims.