Most people know Darryl “DMC” McDaniels as the Grammy nominated MC that merged rock, pop and hip hop to become one of the most iconic rappers of all time as a member of Run DMC. McDaniels is also a hero to me because he is one of the nicest dudes on the planet. He started the nonprofit Felix Organization to help children in foster care, openly speaks on his journey to sobriety and was even invited to the White House by President Obama to talk to youth about responsibility.

McDaniels is also a total comic book head! In July, he launched Darryl Makes Comics. He is the CEO as well as its initial hero. For this exciting project, McDaniels has chosen top comic creators to be his superhero teammates. At this year’s NY Comic Con, the rapper and his collaborators held a panel on Sunday to discuss Darryl Makes Comics.

Introductions quickly turned into the panelists geeking out about their love for hip hop and comic culture. One by one, the panelists paid their respects to hip hop and comics. They spoke of their hip hop heroes standing side by side with the comic characters they love: The Silver Surfer, Melle Mel, Captain America, Afrika Bambaataa, Spider-man, Kool Moe Dee, The X-Men, and the Cold Crush Brothers. McDaniels grew up a shy, straight A student who connected to Peter Parker before he traded his comic collections for a set of turn tables. He was a very shy cat, so when Run suggested McDaniels break out his rhymes from his notebook and form a group, McDaniels looked to comic book culture for inspiration. “The comic books gave me confidence, the comic books gave me an… Escape.” said McDaniels. To get the courage to rap in front of others, he would ask himself, “What would the Hulk do right now?” This was the inspiration for many of his rhymes such as “Crash through walls, cut through floors. Bust through ceilings and knock down doors.” 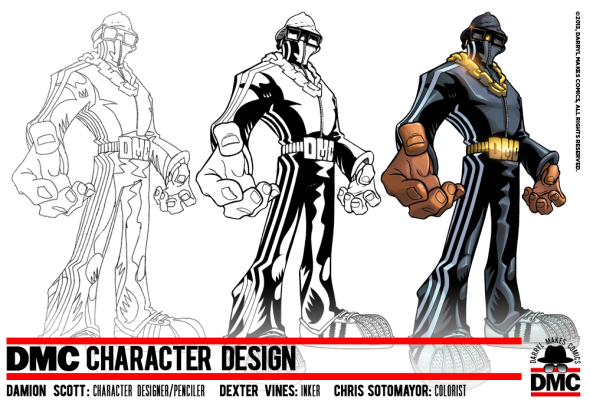 A recurrent theme throughout the panel was comics’ ability to educate. “Comics are a gateway drug,” according to Editor-in-Chief Edgardo Miranda-Rodriguez. He discussed his own experiences using comics to motivate his mildly autistic nine year old son to read. McDaniels said “there was things I learned in comic books that I did not learn in school. Science, history…” He proudly admitted that had he not become a rapper he would have become a teacher, like to his character in the comics.

The dream team stated that one of the main reasons they were creating this comic was to inspire youth and create opportunities for kids to live out their dreams. Senior Editor Riggs Morales even offered the kiddos in the audience the opportunity to come draw for the company in 10 years! Let’s all say this in unison: Awwwwww, how sweet!

Unlike other celebrities who have tried to infiltrate the comic marketplace, McDaniels and his collaborators made it clear that they were complete comic fanboys. Their goal is to create a work of art respectful to the comic culture and the original creators such as Will Eisner, Jack Kirby, and Stan Lee. McDaniels promised he would not be the rapper dude that will “mess up another genre”. “Rappers will ruin everything,” he proclaimed. They “will come in and commercialize and it will be crappy.” First and foremost, Darryl Makes Comics is about McDaniel and his collaborators’ love of comics.

“It’s not gonna be a hip hop book,” but “it has that flavor”, promised Editor-in-Chief Edgardo. The comic takes place in 1980’s New York City. It will be filled with graffiti, B-boy, Salsa, Hip Hop, and punk culture. The Marvel universe is iconic for its NYC landscape, but the Darryl Makes Comics universe takes place in the NYC that is not often seen in comics: the Barrios, The Lower East Side (the home of Kirby), the South Bronx (the home of DJ Kool Herc, Afrika Bambaattaa, Grandmaster Flash, and KRS-One), and other underrepresented, inner-city neighborhoods. It will illustrate social problems that were relevant during the 80’s that are still relevant today, like racism, classism, and police brutality. The book will embody hip-hop culture’s political nature as well as its ability to motivate people to strive for personal betterment. 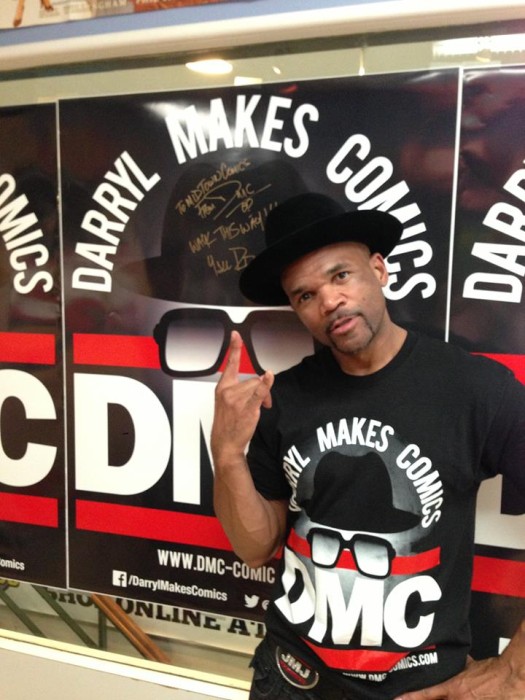 Darryl Makes Comics has been a dream of McDaniels for many years. He took his time with the project because he wanted the perfect team of creative minds to bring the universe to life. DMC is the Superman or Submariner of Darryl Makes Comics, the first superhero in a much larger universe. McDaniels wants to create a universe as vast as Marvel with heroes from all walks of life.

The Darryl Makes Comics universe promises to be a universe that is representative of the world we live in. The company will feature heroes and heroines from different backgrounds and cultures. Miranda-Rodriguez stated that “when we talk about diversity in an industry, we couldn’t, can’t wait for an industry to provide that for you.” “This is a book for everyone” said McDaniels.

The crowd erupted when he promised that in his universe “There is gonna be powerful, positive images of women. There is gonna be some incredible female superheroes, even everyday women. It will be something that young girls and older girls will be proud of, because, put it like this…if it wasn’t for women, none of us would be here right now!”

I will never forget this year’s Comics Con. This panel was one of the highlights of my experience. I am a huge fan of McDaniels. As amazing an MC as he is, I am a bigger fan of McDaniels as a person. He seems committed to everything he does. This project is the embodiment of what he stands for- education, hip hop, comics, motivating youth, celebrating diversity and above all, trying to put a positive work of art out to inspire others.

Look for the DMC graphic novel to be released in January 2014 (ask your local comic shop to pre-order it to ensure a copy). Check out the Darryl Makes Comics website here. Also, in the near future we are going to drop our interview with DMC. McDaniels and I discuss comics, diversity in comics, breaking the geek stereotype, politics, recovery, youth, hip hop and how to be a real life superhero. Be sure to check it out, baby!