Liv Buli, Contributor
I use data to decipher the business of music.

A year ago, you had no idea who she was. Today, she is charting across the globe.

Ella Yelich-O’Connor has taken the music industry by storm. Known as Lorde, the young singer and songwriter from New Zealand released her debut EP in late 2012 and watched her fan base explode as she finalized and prepared to release her first full-length, her track “Royals” propelling her from obscurity to alt pop royalty in a matter of mere months.

Lorde is one of the fastest growing artists in recent memory. To put this into context, it takes the average artist 257 days to go from 20,000 Facebook page likes to 50,000. For those artists that go on to reach 1 million page likes or more, the average is less than half that, at 117 days. Lorde bridged that gap in less than 80 days.

Despite the fact that the teenager was already signed to a major label, she went against the norm and released her first EP for free through platforms such as SoundCloud. It didn’t take long before people were hooked, and started sharing the music online. She started hitting charts, first at home, then abroad, and saw her spins snowball into massive daily numbers. This past week alone, “Royals” was played 835,000 times on SoundCloud, and the official video viewed close to 2 million times on YouTube.

In the past three months, Lorde has seen increases north of 1000% across metrics, from YouTube views, to Wikipedia page views, to new Twitter followers.

Lorde really started taking off in the U.S. in late June, when she hit Billboard’s alternative chart, and went on to command the longest reign a female soloist has ever held in the top slot. Over the summer, her numbers have risen at a staggering rate, from radio spins, to social following, to online plays and views. She is currently the second-most viewed artist on Wikipedia. 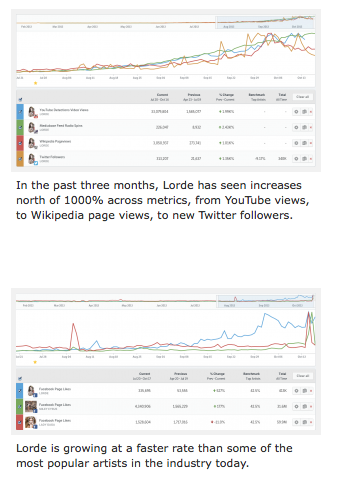 Lorde is growing at a faster rate than some of the most popular artists in the industry today.

Comparing Lorde to some of the biggest female artists in the industry, she is growing at a much faster pace. Both Miley Cyrus and Lady Gaga are currently in the midst of release cycles, and while their totals are on a different level as they are further along in their careers, in the past three months Lorde saw an increase of more than 525% in the number of new Facebook page likes added, compared to the previous three month period. Cyrus saw a smaller increase at 117%, and Lady Gaga in fact saw a decrease of 11%. A similar distribution is true for new Twitter followers.

Despite the popularity of Lorde’s break-out single, which currently sits at the top of the Billboard Hot 100, evidence suggests that she is no one-hit-wonder. When she released two new tracks through SoundCloud in June, “Swinging Party” and “Tennis Court,” they attracted hundreds of thousands of plays in the first few weeks. The latter, as well as the track “Team ,” also occupy spots on the Hot 100, and her debut album Pure Heroine, released in the end of September, is bouncing around the upper echelons of the Billboard 200.

So what is the key to Lorde’s success? Well for starters, working with producer Joel Little, she is creating some fantastic music. Her sound and lyrics are mature beyond her years, and fans are often startled to learn her young age. She relies on her powerful voice, and infectious beats to capture an audience, rather than obscene publicity stunts and ill-gotten attention, adding to her credibility as an artist.

So stay tuned for more from Lorde, who is bound to rule the industry for years to come.