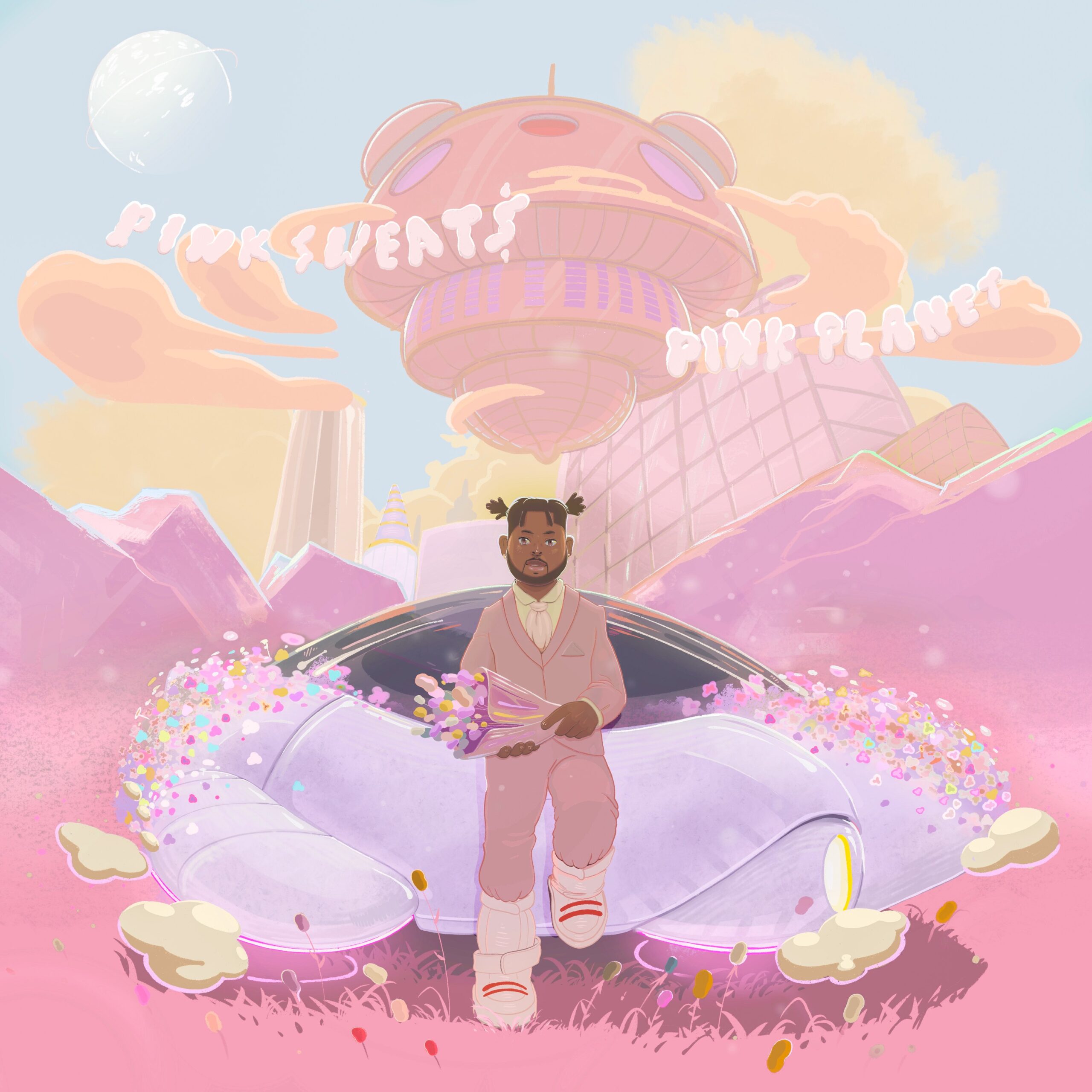 Pink traditionally signifies universal love. Often decked out in the color from head-to-toe, Pink Sweat$ might as well be love in the flesh. He came into this world on Valentine’s Day (love’s holiday), hails from Philadelphia (“The City of Brotherly Love”), believes in the power of love (universally), and he writes his own kind of love songs (with no boundaries). The platinum-selling Philadelphia-born singer and songwriter moves to the beat of his own drum, stretching the boundaries of R&B with a predilection for sunny melodies, fiery falsetto, laidback lo-fi funk, blissful instrumentation, and personal affirmations. Touted by The New York Times, Rolling Stone, Esquire, UPROXX, Billboard, and more and streamed just shy of a billion times as of 2021, he spreads love on his full-length debut, Pink Planet [Atlantic Records].

“I’m just a boy who’s comfy and searching for light,” he says. “I try to find that light in every corner of the world. I want to experience love. I was afraid to show love in the past, because it wasn’t cool or normal. I’m not afraid anymore, and I’m going to use my songs to do so.”

Music came naturally to him and would be his first love. At just five-years-old, he hopped behind the drumkit at church and found his place.

“My father was actually the drummer, so I got on the drums one Sunday…I remember my dad never played again,” he laughs.

Following his high school graduation, he became immersed in the local scene as a fixture at the iconic Sigma Sound Studios and eventually fell into songwriting. Simultaneously, he faced numerous trials and tribulations and quietly endured. After vomiting numerous times a day and falling into depression, doctors diagnosed him with achalasia. He eventually overcame this three-year battle with the serious esophageal condition.

“I had gone through it all by then,” he admits. “I slept on my grandmother’s floor. I got evicted from my apartment. I kept going though.”

In 2018, various friends pitched in to buy him a laptop, and he recorded the independent Volume 1 EP and Volume 2 EP. His breakout single “Honesty” achieved a platinum certification from the RIAA and generated over 500 million streams worldwide and counting. Beyond acclaim from OnesToWatch, DJ Booth, and more, numerous tastemakers and publications proudly touted him as the next big thing. Among a few, Rolling Stone, Apple Music, and Billboard christened him an “Artist to Watch.” He made his late-night television debut with a showstopping performance on ABC’s Jimmy Kimmel LIVE! He also garnered a nomination in the category of “Best New Artist” at the 2019 Soul Train Awards and graced the stage of the ceremony. Plus, BET plugged him as “Artist of the Month” in January 2020. Meanwhile, The New York Times praised him as “a voice filled with longing: a tenor climbing directly into falsetto, steeped in soul music and tremulous with sincerity, in the lineage of Michael Jackson, Usher and, lately, Justin Bieber.”

Along the way, he assembled what would become Pink Planet. In 2020, he set the stage for the album with “17,” which The Fader called “pretty beautiful” and assured, “Pink Sweat$ makes us all believe in true love.” On its heels, the R&B doo wop-inspired bop “At My Worst” amassed over 200 million streams and attracted Kehlani for its irresistible Official Remix. However, it was just a hint of the album’s scope.

Pink Sweat$ didn’t just make a record; he built a world with 18 tracks artfully threaded in orbit around an overarching message and personal mission statement.

“The overall message is, ‘Love is cool. It’s okay to be vulnerable. It’s okay to be kind. It’s okay to be a gentleman. It’s okay to be naïve. It’s okay to jump headfirst into things that you believe in—especially love’,” he explains. “You only get one life, so I want everybody to feel okay being great. The reality is I built this world because I feel like I can’t be myself anywhere else. It’s okay to love this hard. At nighttime when you’re by yourself and you don’t want nobody else to hear it, you can tune in to Pink Planet.”

Tuning in to Pink Planet resembles falling into a vibrant dreamscape with all of the wonder and possibility of your favorite theme park. The opener “PINK CITY” sinks into a fluffy beat as if coasting along on clouds towards a skyscraping guitar solo, heavenly organ, and powerful gospel choir. Meanwhile, he hovers over this backdrop with warm intonation and head-turning high register as he affirms, “When you’re cold and all alone, you can build a city and call it home. And when I was lost and on my own, I got out of the city and made my own.” During the piano-driven “Interlude,” he delivers an intimate spoken word piece where he explains why he built Pink Planet and extends an invitation to everyone.

“’PINK CITY’ speaks to me right now, because it’s where I’m at in my life,” he goes on. “I get to sit back and reflect. I literally contemplated becoming a drug dealer, because I couldn’t get a job. I couldn’t even afford to get on the bus for $3. I feel like I’m at a place where I’m so grateful. I stuck to my guns. I didn’t change up. I’m proud of myself, and the song shows it.”

“It’s about being in love,” he says. “When you find somebody you’re really feeling, it feels like a breath of fresh air. You feel at home. You feel at peace with the world. For one moment in time, it’s like nothing could ever go wrong.”

Whether it be the lovestruck delivery of “So Sweet” or the nostalgic wonder of “Beautiful Life,” he does something completely rebellious. He unapologetically speaks about love without filter. He hides none of his giddiness or glee and uses joy to ultimately make an important comment.

“Culturally, black creatives are in a very unique space,” he observes. “However, it’s still not ‘cool’ to talk about love in black music. I want to change that. Nina Simone believed it’s an artist’s duty to reflect the time. I want to reflect the times and the changing of the guard where black artists are finally free to make the kind of music they want to make.”

By doing so, he presents a universal and timeless sound on Pink Planet and more to come.

“I’m so happy my parents can listen to the album,” he grins. “I’m from the hood. Some of the people I grew up with have gone to jail or worse. I was raised in church every Sunday. I’m proud my dad can text me he loves the project. That makes me happier than anything.”