“I think it’s very important for young people interested in playing guitar to find other people to play with. ”

Blues guitarist Robert Cray has enjoyed an extremely successful career since MTV put his breakout single “Smokin’ Gun,” into heavy rotation back in 1986. Cray rode the crest of an ‘80’s blues renaissance, fueled by others like Stevie Ray Vaughan and Bonnie Raitt, and in the process, has won five Grammy Awards and enjoyed the distinction of being the youngest person ever elected to the Blues Hall of Fame. He’s released a steady stream of quality recordings (fifteen studio albums), maintains a loyal fan following (particularly in Europe), and has become a genuine guitar hero with his own signature series of instruments made by Fender. Cray continues to produce music that straddles a fine line between blues, R&B and rock, with timely, thoughtful and topical lyrics that anyone can relate to. Guitar Coach caught up with the busy guitarist between US tour dates. After the Christmas holidays, Cray and his skin-tight band, Jim Pugh on keys, Richard Cousins on bass, and Tony Braunagel on drums, will head to Switzerland, France and England. They spend several months a year touring Europe. When asked what originally drew Cray to the guitar, he responded, “It was The Beatles. Like a lot of kids my age, I saw The Beatles on The Ed Sullivan Show. I lived on a military base, and the next day all the kids were talking about them. Jimi Hendrix was a big influence too. The first time I heard Jimi’s music was in a school assembly when a local band played “Purple Haze.” The beginning chords just freaked me out. I went home, joined the Columbia Record Club and ordered Are You Experienced.

“I’m really self-taught. Actually, I took about six months of guitar lessons, but I also had friends who showed me a lot of licks. We taught each other. I think it’s very important for young people interested in playing guitar to find other people to play with. You can try out all those things you’re learning.”

Cray arrived a little later to the blues. “At first, I played rock and R&B. My parents had a great record collection, but I didn’t pay attention to it until high school, when I heard Buddy Guy and saw Albert Collins live. He encouraged me to keep at it with the guitar. I was about sixteen at the time. A friend of mine started getting into blues and he turned me onto the classic stuff, and we started researching the old bluesmen, like Robert Johnson. I remember that story about Robert selling his soul to the devil was a big thing. It all became something like a fantasy world to us.” As a listener, I have always been impressed with Cray’s lyrics, which always tell stories in a direct, unambiguous way. “I took a page from Dennis Walker, who produced our early records. Dennis is also a songwriter, and his lyrics painted pictures. I tried to learn from that, and I realized that lyrics have to tell a story. The chords to the songs are simple, the structure of the songs is basic, so the lyrics make the song.” 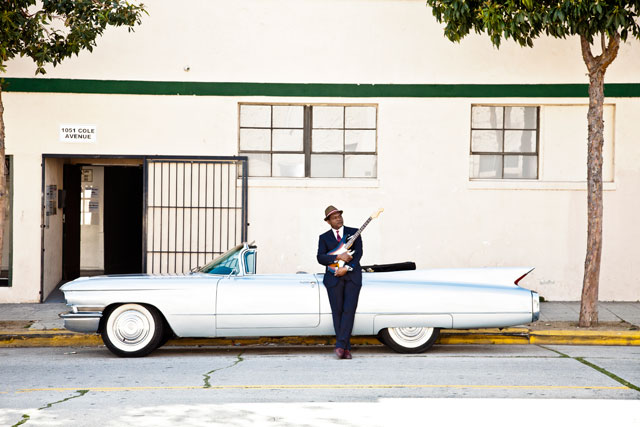 In a recent conversation with Buddy Guy, the blues veteran lamented on the lack of radio support that blues gets, and the lack of venues for blues musicians these days. Cray commented, “In a lot of ways, there are less places to play. It depends on the stature of your band. We started in the clubs when the scene was healthy, then we moved to festivals and performing arts centers, and finally, to concert stages, so we were fortunate to get in at a time when blues was popular and we had the support of MTV and rock radio. I can understand how blues bands have difficulty finding gigs on a local level, but as I travel, I see a lot of blues bands working. “Radio has never really supported blues. When I was getting into blues, it was hard to find it on commercial radio. Blues deserves more airplay, but the only place you’re going to find it is on satellite radio or college radio. Europe is a great market for anybody playing my kind of music, and I see and hear a lot of European blues bands when I’m over there.” Cray has recorded or performed with some of his musical heroes over the years, including Albert Collins, John Lee Hooker, Johnny Copeland and others. What was his most memorable moment? “It had to be working with John Lee Hooker. The man was just totally cool all the time. The great thing was we got to be friends. He’d call me on the phone to see how I was doing. Working with Eric was great too. He’s just a real nice guy. When you’re invited onstage or in the studio to play, the most important thing is making good music.” For decades, Cray’s choice of guitar has been the Fender Stratocaster. “I went to hear Phil Guy in concert-Buddy’s brother-in Eugene, Oregon in 1979, and he was playing a Strat through a Fender Super Reverb amp, and I loved his tone. I spend a lot of time singing in front of a microphone, and the Strat is a lot easier to handle. I used to play a Gibson SG, and later, an ES-345 with the six-way Varitone switch. It was too hard to deal with changing sounds. With the Strat, I get that in-between, out of phase sound I like. Live, I use a couple of Matchless amps with a Fender Vibro-King in between.” Cray, like all recording artists, is coping with the apparent demise of the compact disc format, but he’s not happy about it. His most recent CD, Nothin’ But Love, was released in August of this year on Provogue Records, a European-based label with solid US distribution. “I hope they don’t get rid of CDs. I don’t download music and never have, because I don’t like the way it sounds. When I’m on tour, I still go out and buy LPs. I do know one thing; I see more and more vinyl out there these days, and there are more and more record stores selling vinyl and more music being delivered on vinyl than CDs. I always see record stores in college towns. “I was on an airplane in Europe recently and was reading one of those magazines you find in the seat pocket. I found ads for three record stores that sold vinyl LPs in that magazine. That was amazing to me.” By Bob Cianci