Rebecca Pidgeon Doubles Down With Back-To-Back Play And Concert Performances in Two Different L.A. Venues On May 9th 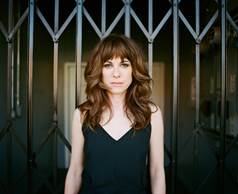 “The Anarchist” With Felicity Huffman At L.A.’s Theater Asylum At 8:00 PM

And Rocks With Her Band Bad Poetry at 10:00 PM At Famed Hotel Café

Los Angeles, CA (April 21, 2015) – Rebecca Pidgeon would be the first to blush if you called her an entertainment double-threat, but taking one stage in a two-character play written by Pulitzer Prize winner David Mamet and two hours later performing a musical set of her own self-penned songs in front of a live audience at another – L.A.’s coveted musician’s haven, Hotel Café…is not for the faint of heart.  On May 9th the charismatic artist will most definitely be doubling down – displaying her acting and singing chops in back-to-back performances in venues just blocks from each other.

In fact, mapquest clocks the jaunt from Hollywood’s Theater Asylum – where Pidgeon stars alongside actress Felicity Huffman in David Mamet’s two-character drama The Anarchist at 8 pm – to the popular ‘ Café’ on the northern side of Cahuenga Boulevard in Hollywood, as approximately a 4 minute near-mile – with no traffic.  Rebecca vows to strap on guitar and running shoes post-theater performance and hit the ‘Café ‘stage at 10 pm sharp, welcoming music fans and attendees of The Anarchist, who will be able to use their theater program for the May 9th production to receive one-half off the $10 Admission price for her Hotel Café performance.

Thriving in successful parallel careers as renowned actress and acclaimed singer songwriter, she returns to the theater as part of the new Los Angeles production of The Anarchist, a 70 minute, thought-provoking play written by Mamet (Glengarry Glen Ross) that originally premiered on Broadway in 2012.  The new production is directed by LA Drama Critics Circle Nominated Director/Producer Marja-Lewis Ryan (One In The Chamber), and also stars Academy Award Nominee Felicity Huffman.  Previews for the play began on April 16, with The Anarchist opening April 24.

Having maintained a notable music career simultaneously with her film and stage successes, Rebecca’s current musical incarnation includes her band Bad Poetry and her recent album of the same name.  Music & Musicians Magazine described the 11-song effort as an ‘adventurous album…sexy and mysterious…without going over the top…’

Acclaimed previous albums like the Grammy nominated Slingshot have also helped garner Rebecca a loyal following.  She has toured extensively with her band throughout the U.S., and snagged high profile L.A. residencies such as the upcoming show at tastemaker venue Hotel Café.  Primed for her May 9th dual-athon, Rebecca comments: “It’s been so rewarding to do The Anarchist with Felicity, as we have known each other for many years.  I’m really lucky to have that same kind of comfort zone with my band Bad Poetry.  It’s my hope that we inspire the  theater audience to follow us down to the Café and see how the other half of me rolls.”

The Anarchist May 9th performance is @8pm, at Theatre Asylum, 6320 Santa Monica Blvd., in Los Angeles.

Audience members who attend the May 9th performance of The Anarchist will be admitted for half price of the $10 admission if they bring their theater programs.

The Anarchist runs from April 24 – May 23, Thursdays, Fridays, Saturdays and Sundays @8pm.

Tickets for The Anarchist: https://www.plays411.net/newsite/show/play_info.asp?show_id=4217