“Conscious music needs to have a spotlight on it and Bob Marley did that bigger than anyone who ever lived,” explained Jacob Hemphill, lead singer/songwriter of the Washington D.C. based American reggae band SOJA, in a late July interview with Billboard following their performance at Manhattan’s Pier 97, as part of the Michael Franti/Spearhead led Soulshine tour.

“I’m not mad that all I hear on the radio are songs about strippers and planes to Ibiza,” Hemphill added, “I just want conscious music to have a place at the table, too.”

If contemporary reggae with a forthright social conscience has a chance of impacting mainstream radio, SOJA is likely the band to accomplish that feat. On August 12th, the eight-piece outfit released their sixth album, Amid The Noise and Haste (ATO Records), and scored their highest chart debut position to date, No. 20 on the Billboard 200. Like its predecessor Strength to Survive, Amid The Noise and Haste premiered at No. 1 on the Reggae Albums chart. Hemphill’s impassioned delivery of topical lyrics include a compelling rebuke of the American system’s negligence towards soldiers returning home from war (“Promises and Pills” featuring Alfred The MC of the DC go-go group Mambo Sauce), supported by the band’s multilayered sonic montage, firmly anchored in reggae’s drum-and-bass-driven pulse. The subtly polished enhancements courtesy of Jamaica born producer Dwayne ‘Supa Dups’ Chin-Quee (whose credits includes Bruno Mars and Rihanna) facilitates the band’s broader aspirations.

“Bands are often criticized for selling out and going mainstream, but we are trying to change the mainstream so that some artists played there have substance,” says SOJA’s manager Elliott Harrington, whose relationship with SOJA goes back to their high school days in Arlington, VA.

SOJA currently has four singles in rotation on radio stations in Hawaii (a major reggae hub that boasts the sole reggae-formatted station in the Clear Channel cluster, KDNN-FM Island 98-5) including “Your Song” (featuring Damian Marley) and “I Believe” (featuring Michael Franti and Nahko). “I Believe” is also in rotation at Triple A and Alternative formats throughout the U.S. and gaining traction on Hot AC stations. 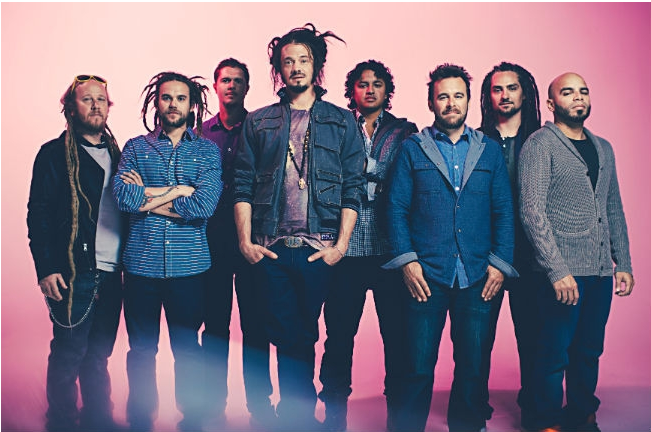 Hawaii is SOJA’s most successful market in the U.S. outside of their native DC/Virginia; in both territories, they have sold out venues with capacities averaging 8,000. Internationally, SOJA’s largest fan base can be found throughout South America, especially in Brazil, home to 1 million of their 3.5 million Facebook followers, notes Harrington.

With over 200 million YouTube views, and a dynamic live show honed over 10 years of near incessant touring (Harrington says the band performed nearly 150 concerts in 17 countries last year) SOJA has emerged as a superstar act within the proliferating American reggae scene. “SOJA expresses what’s going on in the world, putting great music on their substantive messages and fans have gravitated toward that much more than reggae’s typical ‘one love’ lyrics,” says Dan Sheehan, who founded the California Roots Music and Arts Festival, and the upcoming Carolina Sessions (September 13 and 14, Battleship Park, Wilmington, North Carolina) as higher-profile platforms for the homegrown reggae movement.

Developed in the recording studios of Kingston, Jamaica through the innovations of the island’s musicians and producers in the mid-’60s, a result of the demands by sound system dance patrons to hear music reflective of their identity, reggae was initially shunned by the mainstream in its birthplace, but provided a voice for the island’s struggling black population; the overwhelming majority of U.S. reggae bands (Sheehan estimates more than 1,000 reggae bands just on the west coast) who draw their inspiration from vintage and contemporary Jamaican music are white, as are the bulk of their fans, as were the supporters of Bob Marley’s when he toured the U.S. throughout the 1970s and in 1980.

“Many emergent American reggae bands write about their own lives and sing in their own accents while their fierce DIY mentality has created loyal fan bases that they build upon through relentless touring and digital marketing,” added Smith.

The Cali Roots Festival’s fifth-annual staging (May 23-25, 2014), headlined by SOJA, Rebelution and Damian Marley, pulled 39,000 patrons to the Monterey Fair Grounds, generating $12.1 million for Monterey County according to a financial report prepared by Beacon Economics, LLC. Unlike heritage-based reggae festivals held throughout the US, Sheehan selects his acts based on their distinctive sound, social media stats and ticket sales.

“This year [veteran British-Jamaican/Caribbean band] Steel Pulse played prior to SOJA and Ziggy Marley performed before Rebelution; some traditional reggae lovers gave us heat about that, but if you’re talking about hard ticket sales, the American acts far outsell the Jamaican acts,” says Sheehan.

American reggae artists also sell more records than their Jamaican counterparts. Five American reggae acts occupy the top 10 positions on the Reggae Album chart for the week ending September 13. SOJA’s Amid The Noise and Haste has held the top slot for three weeks; at No. 3, Rebelution’s Count Me In (Easy Star/87 Music) has moved 33,049 units in 12 weeks, surpassing Ziggy Marley’s Fly Rasta 14,720 units after 20 weeks. The remaining slots belong to various compilations featuring Jamaican/non-Jamaican acts and soca artist Bunji Garlin’s Differentology (RCA/VP Records). Jamaica’s most-buzzed-about-artist Chronixx whose Dread and Terrible Project (Chronixx Music) is at No. 12 has sold just 6,104 copies after 21 weeks on the chart.

The obstacles facing Jamaican artists, such as securing visas, work permits and travel expenses to the US (non-factors for Americans) have prevented some of the island’s acts from maximizing their potential here, notes Steven Newland, lead singer/songwriter of Rootz Underground, who have opened for SOJA on several U.S. dates and are the only Jamaican band featured on this year’s Carolina Sessions. Newland embraces the American reggae movement as “strengthening the genre for all acts.”

Hemphill, meanwhile, believes the thriving U.S. reggae scene is a direct result of a sagging economy and other problems facing America and elsewhere. “Nobody feels represented, heard or spoken for by the powers that be,” he says, “and when shit sucks, that’s when people want to listen to reggae.”